To celebrate the 100th year anniversary of the formation of the Negro Leagues I was proudly part of Kansas City’s Negro League Museums October 2020 Art Event. Over 100 different artists, craftspeople and small businesses from around the world were involved in the sale, raising money to be donated to the museum to help continue its mission and work.

From the 3 players suggested at each position polls were used on social media to allow users to vote for who they felt should be painted onto the canvas. Each day the suggested Negro League players were discussed for each position with their stories and achievements presented in the youtube series. Social media users then voted for the player they wanted to fill each position. Twenty four hours later this player was added to fill this elaborate, truly unique painting.

The final starting 9 were:

If you would like Andy Brown to create your own Dream Team canvas of any size please get in touch. Using the contact form HERE.

Thank you for your support. 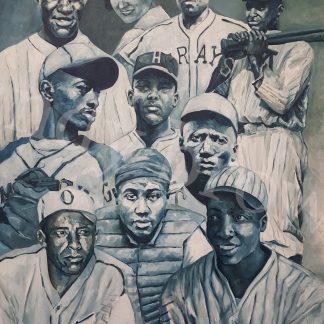